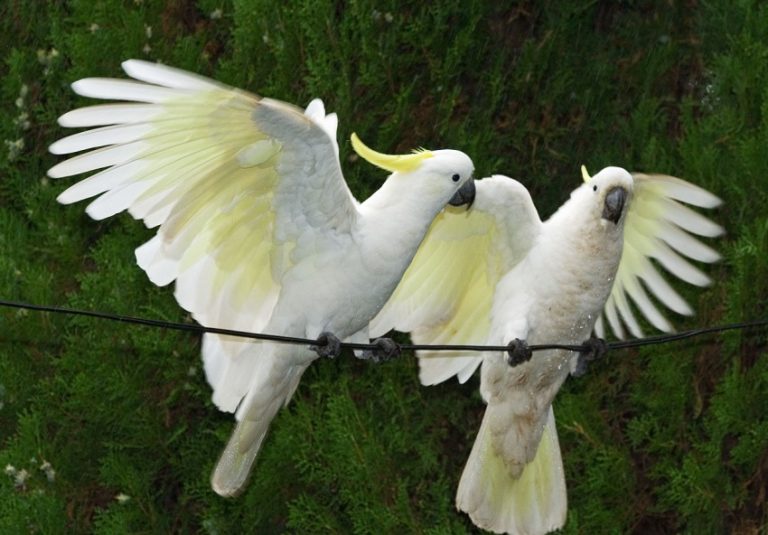 The Cockatoo has a high crest atop white, grey, or black feathers burnished with hues of red and yellow, similar to that of a parrot but larger. The Red-Tailed Cockatoo is a Weather Shaman who lives in hollow trees and uses eucalyptus leaves for the net lining. It uses a specific vocalization to predict oncoming rains. A Cockatiel is similar to a Cockatoo but is much smaller.

The word “cockatoo” is derived from the Dutch word kaketoe, derived from the Malay word kakatua. In the 18th century, the Spanish introduced varieties such as cockatoon and cocatore. The Malay term “older brother/sister” has a loving, perceptive meaning that implies respect and family. Cockatoo was a term used by Australians to indicate who kept an eye out for illegal gaming.

Cockatoos can fly at speeds of up to 43 miles per hour, depending on the species. Some birds, such as the Sulphur-Crested Cockatoo, prefer to soar at a slower pace. Their robust bill also helps them climb and weave through branches more easily. Cockatoo is a symbol for advancement upward to the symbolic treetops or the heavens because of these abilities.

The Cockatoo is patient as it waits for the sun to warm its perch before becoming active in the morning. Following that, the species frequently forages in flocks. Cockatoo symbolism includes socialization and group collaboration.

Cockatoo reminds you of the necessity of hygiene throughout the day. They clean and re-align their feathers after removing dirt and oil. Preening is an important part of courtship rituals since it promotes the bird’s health. When Cockatoo is upset, it goes too far and starts plucking its gorgeous feathers.

The Cockatoo is a messenger in the jungle, with a rough and booming vocalization that helps them recognize each other like a friend who whistles your way. They utilize their sounds to alert predators and to express their feelings. Some birds, such as the Palm Cockatoo, take communication further by pounding messages on dead branches with a stick.

Cockatoos are monogamous and have long-lasting relationships. These birds take a long time to mature, sometimes seven years or more in the case of the males. The Cockatoo’s delayed growth allows them to focus on learning skills that will help them raise their young.

The Cockatoo is clever, curious, communicative, amusing, and community-minded, according to ornithologists. A lone Cockatoo does not thrive in isolation. Cockatoos also enjoy toys, including anything they can chew, disassemble, inspect, or peck with their beaks. Anyone who has worked with a cockatoo understands how much attention it requires.

Be prepared for some shocking, good changes when the curious and outspoken Cockatoo enters your life. Everything appears to turn on a dime, and incredible success ensues. The Cockatoo Spirit Animal fought behind the scenes on your side, but you also contributed significantly to your win. You should be pleased with yourself. It’s fine to be a little cocky right now.

The Cockatoo Spirit Animal delivers not just mundane changes but also spiritual ones. Your outlook demonstrates maturity. Your life plan begins to take shape. While traveling with Cockatoo, other messengers such as Angels and Master Teachers may appear in your meditations or dreams.

A flock of cockatoos flies. Its movement prompts you to consider, “With whom do you fly?” Are you surrounded by “bad eggs” or “birds of a feather”? It’s time to cull out those that aren’t beneficial to your success. It isn’t always simple. Some people in your circle may have known you for a long time. You don’t have to break all ties and flee. Slowly withdraw your emotional ties for the time being.

If the Black Cockatoo is your Spirit Animal, expect excitement and release as you’ve never known before. It’s double good news for artists. A breakthrough is on the way. You’ll have more financial freedom, less worry, more respect from others, and a deeper relationship with God. Life is a bumpy ride, so it’s always best to enjoy the journey without worrying about any potential outcomes. But if you want your fortune told, take a deep breath as I did before my first flight as an experienced flyer - that helped me calm down enough for takeoff!

People that have a Cockatoo as their Totem Animal are unaware of how loud they are, both literally and metaphorically. Their words ring out, and their aura alerts them ten minutes before they arrive; this, however, is not arrogance. It’s just the way the Cockatoo Totem is. The cockatoo totem animal can use its energy for the greater good in many ways. They can serve as advocates and raise awareness of philanthropic organizations or improve social ills with new legislation.

Your heart and spiritSpirit want empowerment, joy, and peace if the Cockatoo is your Birth Totem. You are a great listener, and you generally enjoy being with your friends. However, suppose there’s any chance that drama will arise from the situation. In that case, it is best to avoid it altogether because, in times of hardship or crisis, nobody likes having somebody else get involved for fear they’ll be dragged into the muck as well. You’ll be dressed to the nines if there’s a party. You like the process of getting ready for something, and you meticulously preen each thread.

Your positive attitude is contagious to everyone around you. You might find it difficult to obtain a moment to yourself. It doesn’t worry you as long as you have enough time to take care of yourself.

Working with the weather is part of cockatoo medicine. Perhaps you’re sensitive to fluctuations in barometric pressure. You might also be drawn to mystical arts, particularly those involving clouds, rain, and wind. Exploring esoteric avenues is worthwhile because it is something you are already comfortable with. Get out in the rain, even if you don’t have a profound affection for the weather. It’s a great place to dance! It will purify and re-energize you.

The Cockatoo Totem Animal also appears to inspire travel. You may feel compelled to fly somewhere exotic and exciting, somewhere that appeals to your artistic sensibilities. You enjoy treating yourself to rich cultural activities such as drumming, dancing, and theatre when you’re out and about.

When you’re feeling constrained and want to break free from whatever keeps you back, call on Cockatoo as a Power Animal. Cockatoo can help you discover your voice and communicate your feelings. Cry out a forceful Cockatoo call when you need to let it out or get something off your chest.

Invoke the Cockatoo Power Animal to help you get your creative juices flowing. You know that building things from the ground up gives you a sense of fulfillment. Cockatoo’s Medicine rekindles your creativity and restores your happiness.

Cockatoo was formerly a woman who lived in swampland, according to Aboriginal Australian legend. When the area flooded, she sought refuge in a tree hollow, but the water rose. Spirit changed her into a Cockatoo, allowing her to use her long bill to dig her way to safety. Cockatoo challenges you to think about what scenario to dig yourself out of to regain mental or bodily safety.

According to local legend, black Cockatoos are said to escort a person’s spirit to the other side of the planet. In the same way, their presence foreshadows nurture, sustenance, and rebirth.

When Cockatoo appears to be communicating to you in a dream, it could be a message from a deceased friend or ancestor. More meaning can be found in the rest of the dream. A White Cockatoo in your dream represents spiritual peace or rebirth. If you see a Cockatoo flying down from a mountain in your dream, expect change and increased independence.

The Cockatoo was so famous during the Tang Dynasty that it was shown with Kuan Yin, the Goddess of Kindness, Mercy, and Compassion. Cockatoo Day is observed in Japan on June 15th.