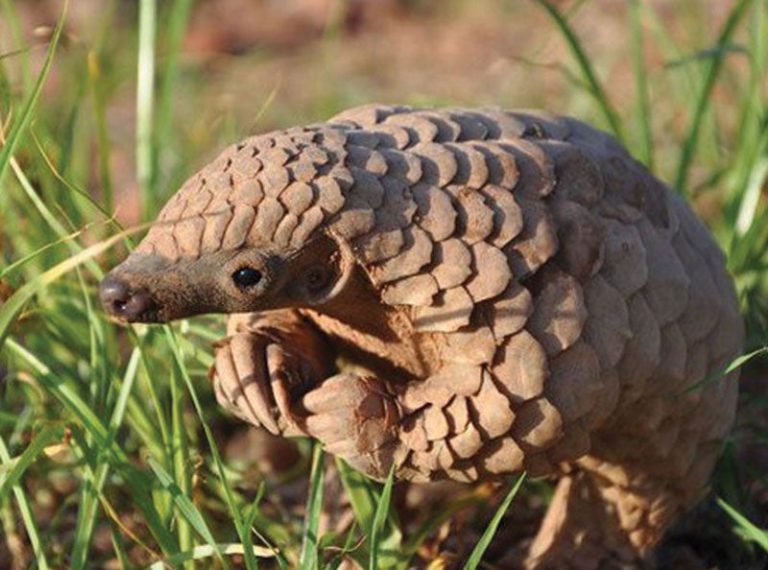 Do you have an identity crisis? Do others make you feel insignificant or invisible? As a Spirit, Totem, and Power Animal, Pangolin may assist! Pangolin teaches you to appreciate yourself while also demonstrating how to speak up and be heard. Explore Pangolin symbolism and meaning to learn how this Spirit Animal Guide may help, inspire, and encourage you!

Because of its endangered status, the Pangolin has become a global symbol of environmental responsibility. The creature is the world’s most trafficked animal. World Pangolin Day is observed every year in mid-February, and it is a day dedicated to raising awareness of the Pangolin’s endangered situation.

Pangolin, also known as a Scaly Anteater, lives in East Africa’s savannas and woodlands with abundant water; it is here that Pangolin stays safe for mating and caring for the young. Pangolin is a Spiritual Assist who follows a solitary road and is drawn to souls who do the same.

The Pangolin is an ancient Spirit Animal that has inhabited the Earth since the time of the dinosaurs. The creatures are stewards of the planet’s most ancient secrets and lessons. This creature, covered in hard scales, appears to have landed here by some miracle aeons ago. Yet, Pangolins have human-like features, such as walking upright and displaying dignity in the face of danger. The Pangolin is considered an “impossible” animal by some; its very existence symbolizes the possibilities in life that you might not imagine.

The Malaysian name for “Pangolin” is “pengguling,” which means “one who rolls up,” and refers to the creature’s protective nature. When a Pangolin is frightened, it curls up into a small ball to protect its delicate belly. Pangolin’s keratin scales account for 20% of the critter’s total body weight.

Pangolin scales are strong and have sharp edges that can sever a predator’s jaw. The Pangolin thrashes its tail and spits out stinky fluids, much like a Skunk if that wasn’t enough. As a result, Pangolin Medicine shares similarities with Skunk Medicine while also emphasizing personal space, safety, and conflict avoidance.

Pangolins are insectivores that dig for food with their curved claws in the Earth or trees. They practically dig their way to their destination, demonstrating determination and a deep bond with the Earth Element. Pangolins have a long, sticky tongue that they use to catch their prey. The Pangolin tongue may reach a length of sixteen inches when fully extended, symbolizing the Divine’s far-reaching voice and the ability to convey one’s thoughts enormous distances via word of mouth. The tongue of a pangolin is a warning symbol.

The creature’s lengthy tongue symbolizes the Divine’s far-reaching voice and the ability to project one’s thoughts over enormous distances through the power of speech. The Pangolin’s tongue is both a warning to choose one’s words carefully and a representation of one’s tastes, preferences, or “tastes.”

The Pangolin has a remarkable sense of smell despite its weak hearing and vision. This not only assists them in locating food but also indicates where other Pangolin territories are located. The species uses the same unpleasant scent to indicate its territory. It defends itself with fluid. You can’t just happen across a Pangolin’s house by chance. Pangolin represents protection, isolation, and the establishment of clear boundaries in this context.

The Pangolin pattern is used in headdresses by some African tribes. The Bamana is one such example. The Pangolin’s picture is said to invoke benevolent Spirits who bring protection and good fortune.

The core lesson of the Pangolin Spirit Animal is one of nonviolence and personal safety. This is not the moment to err on the side of caution. There’s turmoil brewing, and Pangolin advises keeping personal matters under wraps for the time being. Keep your ear to the ground and trust your gut. Prepare yourself by donning your energetic armor if something puts your senses on fire.

A Pangolin Spirit Animal may visit overly sensitive persons for a while, advising them to improve their conduct. It’s pointless to get irritated about the most innocuous of remarks. Even if a person has bad intentions, you must assess whether they say it is truthful or relevant. Pangolin lends its tough outer skin to help you brush those events aside and move on with a high head.

When you have an identity crisis, Pangolin Spirit Animal can be of great assistance and knowledge. More than any other creature on the planet, Pangolin understands what it’s like to be unable to fit into any framework. Pangolins have fish-like scales and a tail that allows them to climb trees like a monkey. As a result, this Animal Helper has confronted the question of “Who am I?” head-on. There’s no reason for you to act as if you don’t want to. Don’t be concerned about the sm.

When it’s time to make a fuss over anything, Pangolin Spirit Animal will appear in your life. Indeed, this isn’t your preferred approach to dealing with issues. But what about those who are oblivious to subtle or even blatant hints? When someone or something crosses your line, it’s time to draw a line in the sand.

People born with the Pangolin Totem Animal are night owls to the core. During the day, they sleep, and at night, they work or play. These individuals are also at their most creative and engaged in the late hours. Like the ever-stylish black mini dress, darkness transforms them.

If Pangolin is your Birth Totem, uncomfortable situations irritate and stress you out. A hurried departure and hiding are natural responses in those situations. You can be angry with yourself if you don’t face such challenges head-on. However, you should wait until you have a strong ally who can handle stressful emotions better than you.

You don’t belong anywhere socially. You are a firm believer in individualism. It’s tie-dye one day and a three-piece suit the next. You enjoy being strange and crazy, and it shows in all aspects of your life. You also like a little mystery and secrecy, which wraps itself around you like the Pangolin’s armor, keeping your personal affairs hidden. It may be tough for others to get close to you. When to let go.

A Pangolin Totem Animal denotes exceptional listening abilities. You have the ears of a stressed-out mother. The tiniest noise stimulates your hearing, causing you to pay greater attention to every phrase or sound you pick up on the breeze. Being hyper-alert can help you in a variety of situations, particularly while obtaining information. You’ll notice details that will help you make smarter selections.

Call on the Pangolin Power Animal when you’ve been stripped bare, feel dishonored, or worthless. Pangolin provides armor one layer at a time until you are completely protected from the negative. Seek Pangolin Energy when someone in your life suffocates you with unwelcome attention; this Helper will teach you how to get the privacy you want and need for your well-being.

If the people in your life don’t understand you, Pangolin can be fantastic as a Power Animal. Wear your uniqueness like a badge of pride. Become a role model for individuals who are having trouble expressing their uniqueness.

When enemies attempt physical or emotional attacks, and their words or actions have a significant impact, it’s time to invoke the Pangolin Power Animal for defense. You can withstand the negative that comes your way because you possess a strength that others admire. However, a little more active support adds an added degree of emotional assurance.

Pangolins, according to Sangu cosmology, live in the sky, where the Ancestors reside. Pangolins are a gift from the Ancestors to the Earth. When a human discovers this creature, they must pursue it everywhere, hoping that the Pangolin will walk into their home. The hamlet sends a message to the Chief, informing him of Pangolin’s arrival. Singing and dancing are part of a joyful rite. The Pangolin, too, joins in the celebrations by standing on its hind legs. If the Pangolin sheds tears during the ritual, it is regarded as an omen of forthcoming rain replenishing the soil.

In your dream, the Pangolin approaches you, indicating that good fortune is on the way. If you’ve been sick, this dream foreshadows improved health and vitality. In your dream, a female Pangolin sheltering her young represents a strong desire to protect the children in your life, whether they are pets or initiatives.

If the Pangolin in your dream has curled up into a ball, it could mean one of two things. The first, and most often, is that you detect danger outside of your consciousness and feel compelled to take action. According to the second interpretation, Pangolin represents a personal secret or fear that you are afraid to expose.

When you see a Pangolin seeking food, it’s a good idea to dive deeper into a scenario and look into the root of the problem. Whatever information you seek will necessitate some effort, but the result will be well worth it. In your dream, two pangolins together indicate that you will soon find a suitable companion who will stay in your life if you so desire.

The Cantonese name for Pangolin is “Chun-shua-cap,” which means “mountain-boring beast,” referring to the Pangolin’s powerful claws. Perhaps this is why, according to Chinese legend, pangolins dug enormous, hidden underground networks for safe passage around the globe.

The Cantonese name for Pangolin is “Chun-shua-cap,” which means “mountain-boring beast,” referring to the Pangolin’s powerful claws. Perhaps this is why, according to Chinese legend, pangolins dug enormous, hidden underground networks for safe passage around the globe.