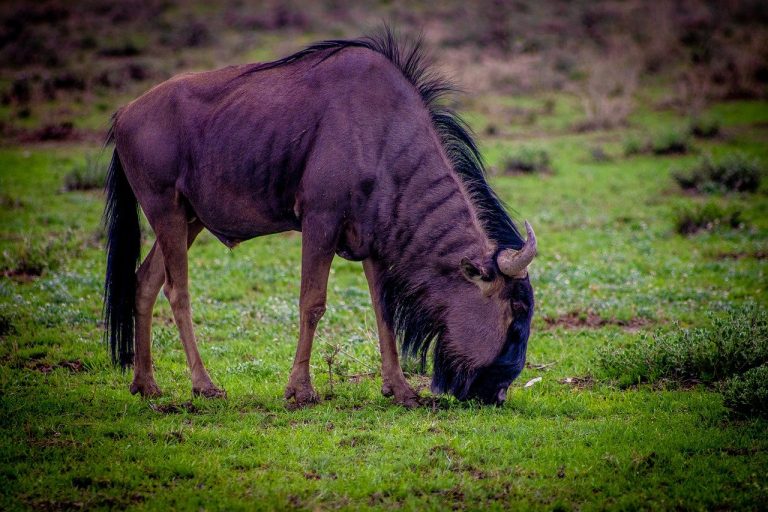 The Wildebeest earned its name from the terrifying visual effect on a first encounter with the species. An enormous head, sharp horns, tousled mane, and pointed beard combine to give the Wildebeest and beholders an intimidating profile. Their outward qualities deter many predators, but this is a ruse. When confronted with an opponent, Wildebeests prefer to run rather than rumble, earning them a reputation for passivism and deception.

Wildebeest prefers the Savannah and plains and can only be found in Eastern Africa, from Namibia to Kenya. While the huge group of Wildebeests looks for dry land in May or June, they migrate in enormous numbers. Zebras and gazelles join in the migration, adding to the strength in numbers. Wildebeests represent travel, adventure, constant mobility, and finding safety and strength through collaboration with others.

Predation is reduced by the sheer size of each Wildebeest group. Wildebeests also keep neighborhood Lions away from Giraffe calves, which is a nice benefit. All of the creatures work together to avoid the rainy season for as long as possible. What a picture of dedication and focus!

Wildebeest come in two colors: black and blue. The Blue Wildebeest, which weighs between 260 and 600 pounds, resembles its ancient relatives. They have black stripes on their back and shoulders and are four feet long. Wildebeest can run up to 50 mph despite their size. A silver-blue shine can be seen on their coat. Faith, sincerity, sharp-mindedness, trust, wisdom, and an open mind are represented by the color blue.

The Black Wildebeest, often known as the “White-tailed Gnu,” appears sleek in comparison. It weighs about 290 pounds on average. The color black is linked with power, formality, and violence. Should something encroach on their one-square-mile area, the attribute of hostility manifests itself in spades. Wildebeest isn’t about letting strangers inside its home!

Wildebeest communicate by making loud vocalizations. A male Wildebeest’s bellow can be heard almost a mile away! They also communicate through body language and smell. Perhaps the perfume in the air explains why the Wildebeest was characterized as having “devastating breath” by the Roman historian Claudius. Malodorous or not, Wildebeest stands as the paragon of successful communication, especially across great distances.

The female Wildebeest lives with her young calves at home, far from the male’s territory. There are always more females in small groups who seem to prefer areas with less male influence. The female Wildebeest represents feminism, emphasizing the Feminine Divine, and Yin Energies in this painting.

Wildebeest was regarded to be a mix between a Buffalo and a Boar by the ancient Greeks. According to legend, Wildebeest committed a heinous crime in the past. As a result, the Gods cursed the animal, causing it to look downward. According to legend, the Wildebeest’s stare can turn you to stone if they glance up. Pliny the Elder provided a much more scientific explanation for why the creatures appear to be looking down. The Wildebeest’s stature is due to its ability to adapt. Wildebeest represents keeping a strong focus and the concept of “keeping one’s nose to the grindstone.” The Wildebeest’s gaze also connects the Animal to the Earth Element and grounding symbolism.

When it’s time to enhance your family relationships, think of the Wildebeest Spirit Animal. The creature invites you to spend time with those you care about. Keep in mind that you have a family of choice whose essence brings joy and harmony. You examine a practical method to establish more oneness.

When the Wildebeest Spirit Animal talks to you, it’s usually when you’re in a circumstance or relationship where you should consider retreating rather than fighting. Not every struggle is worth your time and effort. You will not be able to win all of them. Using your inner wisdom to choose your conflicts is a part of Wildebeest’s Medicine.

If it’s time for you to relocate, whether for a season or permanently, the Wildebeest Animal Spirit will come to your aid. Transitions are a necessary aspect of your journey toward completing your soul’s mission in this lifetime. Gather your belongings, put on some comfortable shoes, and set out on your journey with Wildebeest Energy at your side.

If something in your current plans appears to be putting you in danger, Wildebeest is there to help. The Wildebeest’s middle name is endurance. You don’t have to be an island, as your Animal Ally reminds you. Many people find it challenging to reach out and seek support. Remember that wildebeest move in herds. Needs aren’t something to be ashamed of.

People that have the Wildebeest as their Totem Animal have a powerful presence that fills the room. People wearing Wildebeest Totems project a tremendous presence, even though it can appear odd at times. You often have to remind a Wildebeest Person how noisy they are during chats.

You would appreciate parties and social gatherings if you were born with a Wildebeest Totem Animal. You race to find your favorite finger foods once you arrive. Nothing beats a delectable snack followed by a stimulating talk with close friends.

You’ll always answer the door when opportunity knocks, assuring your success. You wouldn’t mind living in a communal setting if it meant visiting an exotic location. You have a clock inside that is tuned to the Earth’s cycles. You supplement annual and cyclical chores with your awareness of the dramatic seasonal variations.

You are a creature of instinct if you walk with Wildebeest. You have objectives, but you must rely on your instincts for guidance. You may be tempted to stick your hand in too many proverbial pots at times. Make a priority list and stick to it.

Your friends admire you because of your fearlessness. You instill bravery in others and strive to bring people together for the common good. You can scan a group of people and determine who would be best suited for various activities.

Each of your senses contributes to the thrill of the moment. You know how to hold yourself in such a way that you can send messages without saying anything. People with the Wildebeest as their Totem Animal are drawn to the performing arts because they can put their innate artistic abilities to good use.

When making peace with one or more family members, invoke Wildebeest as a Power Animal. Silence isn’t going to help. After that, you should improve your ties by speaking honestly. Allow other family members to assist in the planning of intervention if the situation impacts them.

When you need assistance with a move, look for Wildebeest as a Power Animal. Wildebeest assists you in focusing on the things that will make you the happiest. You may rely on the creature’s energetic influence to help the transition from start to finish go smoothly.

Wildebeest is portrayed as a wise creature in African legends. Its name is one of the blessings for newborn babies. A popular prayer asks for a child to grow as tall as a Giraffe, as powerful as a Buffalo, and as wise as a Wildebeest.

Dreaming of a dashing Wildebeest foreshadows impending danger. Something from your past is threatening to derail your current plans. Keep bitterness and hostility to a minimum, as releasing those vibrations clears the way.

You are living your bliss if the Wildebeest in your dream is grazing. You’ve discovered the freedom you’ve been looking for and can now establish a sacred environment in which you can grow. If there are multiple Wildebeests in a group, expect a surprise visit from family or friends.

An ambling Wildebeest traveling from one location to another in your dream is a bad sign. There are some changes in the works. Keep everything moving at a slow and steady pace. The business in your life may cause you to lose focus and make unwise decisions.

The male Wildebeest fills in for Taurus in some star charts. Betelgeuse in the constellation Orion is where you’ll discover the Female Wildebeest. The Zulu refers to the star Spica as the “Wildebeest Star.”