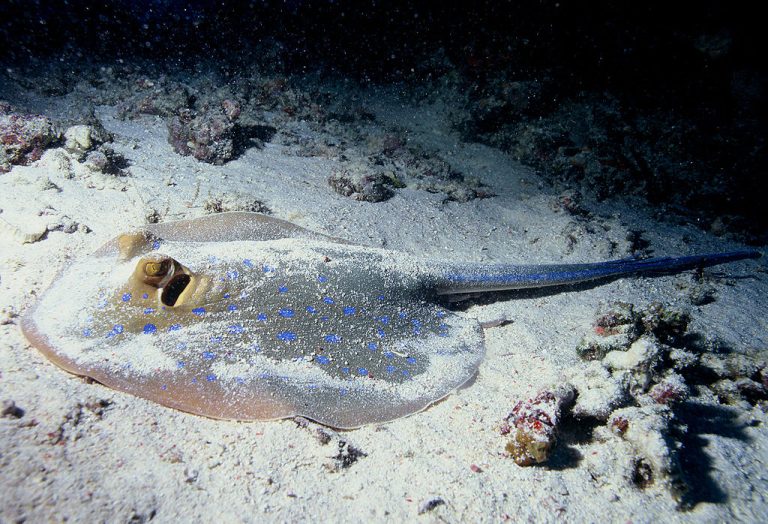 Stingrays are labeled as water eagles by some, comparing the wings and fins alike, moving swiftly through the ocean. Stingrays are also closely related to sharks. Their sizes come up to 22 feet and could weigh up to 3 tons!

Speaking of the ocean, the ocean is a constantly altering environment. On the grounds of that, stingrays have to adapt quickly, hence associated with adjustment and locomotion since stingrays are in the deep waters where people rarely go, which symbolizes the inner workings of our subconscious mind.

While looking for food, stingrays use their energy wisely, teaching us about the effective use of our effort. Stingrays rarely appear as ruffled; they always seem calm and focused on their goals illuminating us further.

It is unquestionable that those working with the rays face or work with their emotional nature. A spiritual take on the rays specifies the mating of manta rays on the full moon, making a powerful symbolism on both the full moon and the ocean having ties with water as an element.

Some often consider stingrays as patient beings; with that being said, it takes a year or more for stingray babies to appear!

Not only patient, but stingrays also show means of cooperation. When parasites latch on to their exteriors, they go to areas where fish clean their skin. This signifies that partnership shows strength.

Hawaiians believe rays to be spirit guides who offer wisdom and strength. The native word for manta means two breaths, which is observed as they fly out of the water and return with ease.

There are also various superstitions when it comes to stingrays. Filipinos believe that the tail act as magical restraint or supernatural beings like vampires, witches, and even ghosts! In Thailand, people believe that handing a stingray brings strength and power, and the backbone brought good luck to the bearer. Caribbean beliefs tell us that kissing a stingray ensures you many years of good luck. And the list goes on.

Gaining the stingray as a spirit animal should be exciting as your hard work is reaching culmination. Trust yourself and wisely use your skills to see this through. Stick with it and avoid drama if possible.

A highly complicated emotional issue would be another reason the stingray has visited you. The stingray spirit comes showing you how to navigate this tricky situation without emotional harm on either side. If you have diplomacy and tact, you can easily win.

Everyone has moments where they lose their way. If you feel confined or off track, a stingray appears so you can redirect yourself to a healthier situation. Let this spirit animal be your guide. Flexibility in your moment along the way is taught that rigidity should be avoided

Whenever you feel overexposed, stingray spirit settles you under the sand. Be at peace, do not overt involvement. Stay there for a while.

Being born with stingray totem animal, people seem to know when a predator of any nature is around. They usually move to a sacred place, camouflaged, until they find a solution in those moments.

You’re a person of action if stingray is your birth totem. However, you have to watch about sometimes as you can be aggressive at the wrong time. As mentioned before, patient restraint lies within you. Wisdom comes in knowing the difference. Some battles can wait. Some cannot.

Feeling things deeply also comes with walking with a stingray spirit, more explicitly feeling love. You are the type of person to fall in love very quickly, which can be a rough patch at times. Settle your mind and spirit before jumping into huge commitments. When you are out of balance, you cannot always see through murky waters and find the truth.

Inventive adventures would be another way to describe stingray people. You love trying out new things mainly related to water. Things like underwater diving or positions like resource scientist.

Stingray totem has two defined sides. When you’re truly in your element, you become the center of attention without trying. Or when you are out of your element, you stay on the sidelines and still yourself. This is something that brings out the “sting” in stingray.

When it’s time to stop and plan before making important decisions, call on a stingray power animal. Just like stingray glides through, you can fly through situations with ease. Again, stingray is a potent animal ally if you want to improve your social skills and be more assertive or get your point across.

Invoke stingray as a power animal when you lose focus and need help finding your direction. Their natural navigation abilities can help your work through difficulties and trying situations. This fearless animal ally can also help you deal with situations that frighten you. “Reclaim your confidence,” says the stingray.

When you want help moving into a new environment or role, invoke stingray as a power animal to do so with more poise. If you want to connect with the water element and trust your inner voice, the stingray is ready to help ensure your success and growth.

Seeing the rays as sacred things and food seems inconsistent, but it is not so in aboriginal cultures. According to them, the ancestors provided these beautiful creatures as nourishment. Naming one such ancestor- Gawangalkmirri; this being has a sleek black coloring with white dots looking like stars. This creature is gentle towards the children of the tribes and enjoys interaction! Educating the young in survival and oral traditions is something that the Gawangalkmirri believes to continue onto the generations to come.

Associations with the lands sustenance, fertility, harmony, parenting skills, and survival of the tribes’ traditions are through Gawangalkmirri.

The following is The Enchanted Stingray from the Maori Folktale. On a lovely night, a man named Karo Pat watched his children happily dance around the fire. He stopped them at a point to show them a stingray jumping from the waters. To watch more closely, they all ran to the water. One of his children reached for a stone, thinking to throw it at the stingray. Koro pat stopped her and then sat all three of them down for a story about the local stingray guardian.

Koro began by talking about a stingray named Whaitere in a small bag. He said that she gathered food and played with other fishes among the rocks and weeds. Whaitere was told by her parents to stay away from the people fish who could travel on top of the waves. Many of her friends were harvested from their little bay by the people fish, never seen again.

Over time food became scarce, and more of her friends disappeared, and Whaitere’s parents were nowhere to be found. She was crying and afraid, and she looked everywhere. She let herself fall to the seabed and watched and waited. Since the fish people came with more traps taking children, she thought the same happened to her parents.

Whaitere refused to move. Her remaining friend tried to get her out of the sand with songs and food, but that didn’t work. She was puzzled about why those with good hearts were gone. So, she began to pray. Her love-filled thoughts for her tribe seemed to wash every corner of the ocean.

Hinemoana, the ocean maid, heard Whaitere. She went to her, gathered her up, and took her into the underworld. Whaitere was instructed to eat the food and stay forever with her parents.

It took some time for Whaitere to find her mom and dad. She cried and asked them why they left her. Her parents remained quiet before showing her the wonders of the sea crystal caves and underwater rainbow to eternal gardens. Eternal spring was their last stop, the cavern filled with beautiful green light.

Whaitere’s mother told her to rest on the rock. As she did, she transformed, having colors appear on her skin and magic flowing through her body.

Her father explained that it was her fate to become an underworld guardian who teaches respect for the ocean and not remain with them.

After returning to her tribe, no one recognized Whaitere. She began speaking of her experience and how she gained her magic until the wonderful moment didn’t last as the sounds of people fish approached once more.

Whaitere dove under the shadow of the people fish, flapping her wings and turning on her back. Tilting the shadow, doing it again as magic flowed out of her and the people fish were now in the water instead of above it.

Only one people fish swan to the shore, but he began falling into depths. Remembering her charge, Whaitere told the man to respect their bay and teach others likewise and then returned him to safety on the shore. He did as instructed.

Whaiteres tribe was watched with wonder by the people feeling that the whole lace had become magical.

With his story finished, Koro Pat returned to the attention of his children and said that magic is needed along with respect to take care of a place like this. Seeing the stingray reminds them of that. And the children, too, would tell this story to their children.

Having dreams of a stingray can mean many different things, mainly symbolizing emotional release. In your current reality, you will be geared up to leave the past behind and not be shackled to your feelings.

Dreaming Of a cluster of stingrays coming your way could mean that you are avoiding something or responding in a negative way and reflects old ways of thinking.

If the stingray surfaces from the water, it means something sensitive is coming your way.

A calm stingray appearing in your dream indicates that you need to address current issues in your life worth the familiar serenity.

An aggressive stingray could imply panicking. Stop, breathe, relax and then approach those things wisely and carefully.